Labour to pothole contractors: “GET ON WITH IT!”

In 2010 the Tories and Lib Dems signed the city up to a reckless £2.7 billion, 25 year contract with Amey for the repair and maintenance of roads, pavements and street lights.

With the city’s roads deteriorating the Council won a Court of Appeal case earlier this year requiring Amey to meet its contracted obligations. Their poor performance, evident from the appalling state of many roads, has led to significant deductions in the payments made to Amey.

We’ve demanded that Amey get on with the job of fixing our roads instead of trying to get out of the contract.

The people of Birmingham want the potholes fixed and they want value for money. Now it’s Labour’s job to make sure they get both. 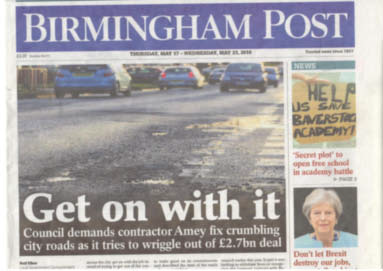